Exclusive dining at the Chef’s Table provides a unique view of the dynamic kitchen team in action.

Award-winning cuisine in an intimate setting

Delight in a masterful feast for the senses at our Michelin-starred restaurant. Exquisite French cuisine against the backdrop of the Parc de Versailles.

The restaurant is open for dinner on Fridays and Saturdays, and for lunch on Sundays, upon booking. The Chef has designed a culinary experience through a five-course or seven-course menu.

For your information, valet parking is available during your dinner. Our concierges are also at your disposal to organize your transfer from Paris, at + (0)1 30 84 51 00.

Pets are not allowed in our restaurant.
Bank checks are not accepted.

Please note that face masks are mandatory to access the hotel property. They can be removed once seated.

Do you feel like going to Versailles for a gastronomic escapade?

A feast for the senses, a few steps away from the Royal Domain.

For a booking or any further information, please contact our reservations team by email or by telephone at +33 1 30 84 51 20.

He has always had a vocation for cooking.

Trained at French gastronomy school Grégoire-Ferrandi in Paris, Frederic Larquemin started his career along with Chef Henri Charvet at Comte de Gascogne, a Michelin-starred restaurant nearby Paris. At the age of 18, he arrived in London, eager for discovering the world, by French Chef Michel Bourdin’s side at Connaught and joined Gordon Ramsay’s team at the Claridge’s, which gained its 1st Michelin star at that time.

Since his early childhood, Eddie Benghanem has never lost interest in pastry. The first real pastry he made was a strawberry tart, which his parents, restaurant owners, ate with delight. As a perfect playground, the restaurant quickly took him through the learning stages : winning certificates, mastering techniques, etc…

Since 2008, Eddie moved to Waldorf Astoria Versailles – Trianon Palace. One of his signature desserts at the “Gordon Ramsay au Trianon” restaurant is his Roasted Apple with semi-salted caramel and passion fruit, hazelnut Sabayon ice cream. At La Véranda, the pastry chef invites us to discover his collection of simple classic desserts, like his praline-chocolate with vanilla, frozen coco and passion fruit.

Spoil your loved ones with an unforgettable experience at the Waldorf Astoria Versailles – Trianon Palace.

Surprise themselves with an extraordinary dinner at our Gordon Ramsay au Trianon Michelin-starred restaurant, in the elegant atmosphere of our La Véranda brasserie, with a one-of-a-kind treatment in our luxurious Spa Guerlain or simply with a unique stay in one of our sumptuous rooms…

The internationally renowned, multi-Michelin-starred chef, Gordon Ramsay has a string of successful restaurants across the globe, from Italy and France to the United States. Chef Ramsay is also a master of the small screen with four top-rated FOX shows, including Hell’s Kitchen and Masterchef, airing in more than 200 countries worldwide. 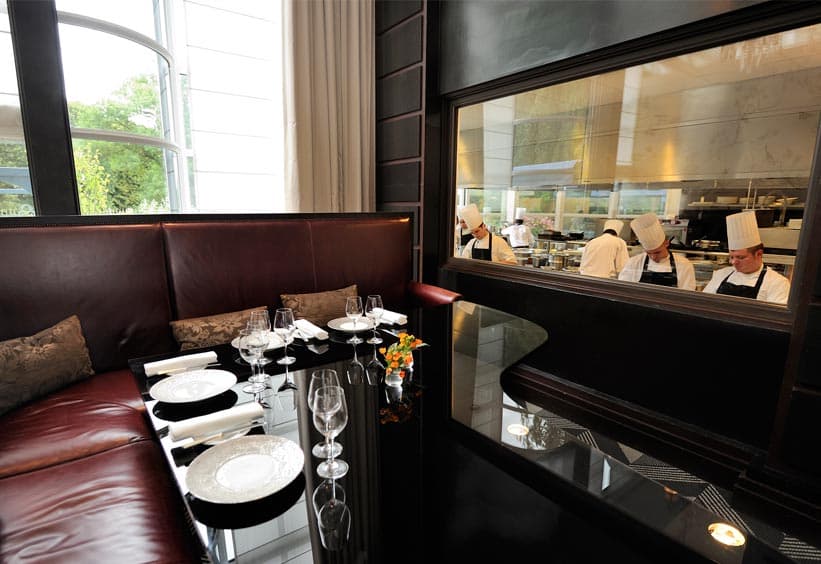 The exclusive Chef’s Table at Gordon Ramsay au Trianon features views of our dynamic kitchen team in action. Treat up to six guests to an exquisite, fully personalized dinner experience.